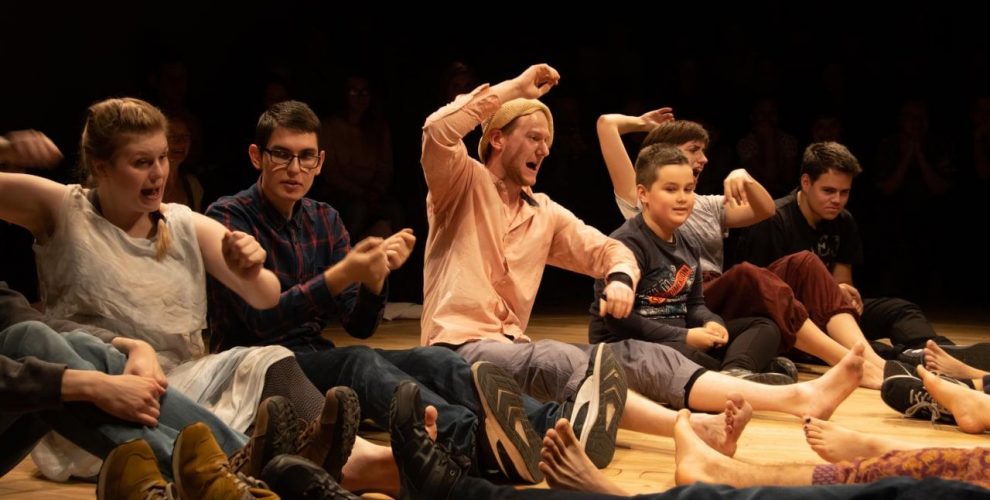 St. John’s College is delighted to welcome Flute Theatre back for a two-week residency where they will bring their unique sensory drama games based on the essence of Shakespeare, to our young people (8-19th November, Wolfson Theatre).

The residency marks the start of a fundraising campaign to support the partnership for the next three years, at a cost £45k each year. The project will include performances during the school year on-site at St. John’s College, and an opportunity for the learners to perform with Flute Theatre at Brighton Festival every summer.

Flute Theatre works with autistic people, creating unique sensory games based on Shakespeare’s heartbeat that allow actors and participants to share how it feels to be alive.

St. John’s partnership with Flute Theatre began in 2019 when Jo Horsley, our Head of Drama, brought groups of autistic leaners to Flute Theatre’s production of A Midsummer Night’s Dream at Chichester Festival Theatre. Flute’s first residency was at the college in May 2019.

“During that first week of performances, we found a real home for our work,” says Flute Theatre’s founder, Kelly Hunter MBE. “This was thanks to the vision and talent of Jo and the extraordinary outlook of the College itself, where every learner is respected and treasured for their individuality.”

The theatre company is developing six global ‘centres of excellence’ for their unique work. They will be in Peru, India, Spain, US, London – and St. John’s College.

You can make a donation to support our partnership with Flute Theatre here and see more about the work here.

The Reason I Jump film review

Today, ahead of the half-term break and the Jubilee Week, we'll be celebrating The Queen's 70-year reign with games and Jubilee picnic fun! Happy holidays to all & thank you to all our amazing staff working over the holiday to support our residential learners. You're the best. ❤️

Lou Harman has been at St. John's for 23 years. Starting as a care worker, she has built a career with us, making a huge positive difference to the lives of young people. Are you the next Lou? Visit our jobs site (link in the profile/bio) for vacancies. http://ow.ly/tqu550JaYCg

Keep up to date with what our students are doing.

Today, ahead of the half-term break and the Jubile

May is UK National Walk Month! Our learners (well,

This week is National Epilepsy Week 2022. Around h

So many of our staff start as residential support

This week, we have launched a mini recruitment cam

Safeguarding is a priority for us @ St. John's & w

Today, 18 May is National Numeracy Day! Check out

St. John’s is a charity. Your donations will help to change the lives of young people with learning disabilities